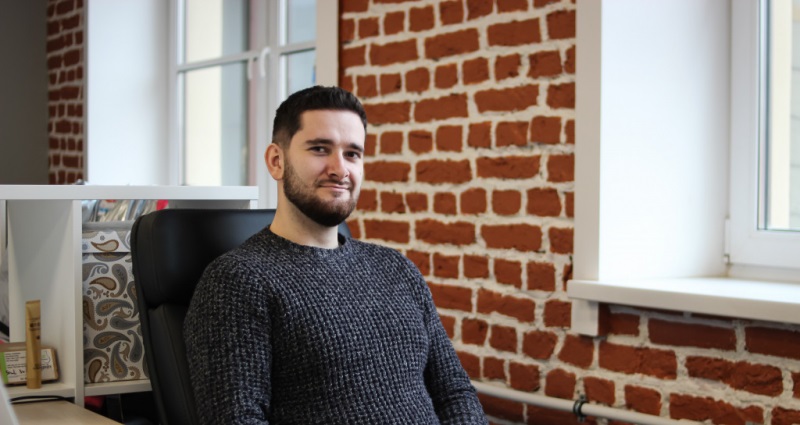 Dmitry Zhirihin, a PhD student at ITMO University has received the Graduate Fellowship of the IEEE Microwave Theory and Techniques Society. This prestigious award is annually granted to only 14 young scientists working in the field of microwave physics. The committee evaluated Dmitry’s research of topological insulators, deciding to fund his further work.

Tell us about the Fellowship itself – what is it and who can receive it?

This Fellowship is from the Microwave Theory and Techniques Society, created at the Institute of Electrical and Electronics Engineers (IEEE). The award is meant for Master’s and PhD students who conduct research in the field of microwave radiation or work with devices based on it.

The Fellowship amounts to $6,000 per person, and it is annually awarded to 12 physicists, who work with microwave electronics and engineering, and two researchers who deal with medical applications of microwave radiation.

To be eligible to apply, you have to study either microwave electronics or microwave engineering, and be involved in a project in these fields that will be ongoing for the next 12 months. With your application, you send in your CV complete with your publications, titles, etc.

Why did you decide to apply for the Fellowship?

I was inspired by my research advisor, Prof. Alexey Slobozhanyuk, who has also received this Fellowship. His research advisor, Pavel Belov, was also among those having received the award – and they are the only two people in Russia to have been awarded this Fellowship during their PhD studies. It’s important to note that a number of other ITMO University students have received the IEEE undergraduate/pre-graduate fellowship. I developed a sporting interest – I wanted to compete for this prestigious award and win a significant sum of money.

How did you find out that you won the Fellowship?

I had just seen 1917 with my friends and was coming out of the cinema to discuss it over something tasty when I got the email. At first, I thought it was spam – it was from someone I didn’t know. But then I opened it to find out that they were congratulating me on winning the contest of the IEEE Microwave Theory and Techniques Society. It was a great surprise for it’s a very competitive field.

You mentioned that applicants have to name a project they would fund with their award. What was the project you described there?

It’s a project on topological photonics which has some connections to what I am doing within the framework of my PhD thesis. It’s common knowledge that we want our devices to get smaller, but the smaller their components the harder they are to produce. When a certain size is reached, any microscale flaw can cause a significant decrease in the efficiency of a device. That’s where topological photonics come to our aid.

The so-called topological insulators were discovered a while ago (Nobel Prize 2016). These structures act like insulators, because there is no current inside them. The surface of these materials, however, can pass a current. What I am working on are electromagnetic analogs of topological insulators, where the current is transmitted by electromagnetic waves. Thus, these structures allow us to overlook flaws in components because when an electromagnetic wave travels down a surface and hits a flaw, there is no dissipation (that can be seen when we bend an optical fiber) – the wave will simply overcome this flow and run further without any losses.

How did you come into topological photonics?

Initially, when I was a Bachelor’s student at Peter the Great St. Petersburg Polytechnic University, I specialized in quantum electronics – lasers, MRI and so on. I was drawn to quantum electronics after I’d finished school, it was something extraordinary.

Then, in 2015 I got into a Master’s program at ITMO and started my research on metasurfaces under the guidance of Stanislav Glybovski. Metasurfaces are very interesting materials, where a simple change in geometry of separate cells within the periodic structure allows us to get any property that we want: the material can absorb all the waves, reflect them, switch their polarization and much more.

One day, I was approached by my future research advisor, Alexey Slobozhanyuk, who had just come back from Australia, and needed an extra pair of hands with a project. He asked me to help him with a project on topological insulators, and back then I had no idea what they were. It sounded interesting, so I decided to try. We started working under the guidance of the world’s leading specialist in topological photonics, Alexander Khanikaev, an associate professor at City College of New York. The aim of the project was to study an open two-dimensional system and experimentally detect its topological edge states.

As a result, we published a paper in Nature Communications. I liked this project very much, it was inspiring, so I decided to dive deeper into this topic – and that was how it started. By the way, I collected measurements for this paper on New Year’s night. We were told at the end of that year that we had to send in all of our corrections, and I was the only one left at the lab. Our reviewer had a question: one of the effects we described couldn’t be replicated in the optical spectrum, so we had to demonstrate it in the microwave one and send the results back. No one else could do it, so every day from December 30 to January 8 or 9 I would come to the lab to measure and measure and measure. And I finally succeeded. It was a lot of work, but the results were worth it.

It’s actually something of an ill fate at this point – I get almost all of the results by conducting experiments on Christmas holidays. I guess that's the secret to my success: New Year brings happiness but the main thing is not to waste time.

And what does a day of a physicist studying topological insulators look like?

One of the interesting points is that each day is unique. We don’t spend our days doing one and the same thing sunrise-to-sunset. There are weekly seminars on various natural sciences. We regularly have visits from researchers from all over the world, who come to us with lectures or even courses. We also have meetings with industrial partners. Our Faculty also actively promotes interdisciplinary collaboration. There are also some team-building activities. For instance, right now we hold morning and evening tea-parties where we discuss research problems. It is important to note that the Faculty allows us to freely choose what we’d like to do in our work.

One precious aspect of our work is in the opportunity to do the whole spectrum of scientific activities. First, you deal with theory to develop a hypothesis. Then, based on this work we develop structures, where we plan to find the effects we described theoretically. There is special software that can model and compute the necessary design.

After that comes the experiment. It means that the modeled structure has to be built, and sometimes we do it ourselves – we braze, mill, corrode, there’s a lot of work. Finally, we go to the nonreflecting room. There, electromagnetic waves are absorbed, which allows us to conduct our experiments in ideal conditions. These rooms are quite expensive and not every university can afford them, but we have one.

How do you conduct experiments in this room?

There are several measuring methods, depending on what you need. We have a lot of professional measuring equipment that works in the microwave range: a vector network analyzer, a scanner, and other devices. This kind of equipment is used in leading companies and research centers, and at ITMO our students have access to that, which allows them to get a unique experience.

No human can be inside a nonreflecting room when measurements are taken because a human body reflects the waves compromising the results. Moreover, I noticed a very interesting aspect once when I had just started conducting these experiments: we were putting up two antennas, one of which was radiating the structure while the second one accepted the reflected signal. You could see how the measurements changed depending on whether the door to the room was closed or not.

Which part of your work do you like the most?

Naturally, I love experiments most because they get you closer to reality. Theoreticians can come up with anything – and it can be true, but first we’ll have to prove it. You can never apply the results of research without at least the initial experimental proof of the studied effect. It’s important for me to know that my work can be applied in the national economy or in a household.

Of course, you need a certain experience to conduct experiments. Sometimes, you have to do things over. On the one hand, it’s frustrating and exhausting, on the other hand, the process itself is captivating: you see your goal, you get valuable experience that you can pass to someone else and that’s incredible.

What inspires you in your work?

I think it’s the novelty – you can do whatever you want, whatever you’re interested in. It’s inspiring to discover physics from a point of view that was never taken before. When you notice an effect that no one else spotted before you, well, I wouldn’t call it euphoria, but it’s a great wave of happiness at least, a huge smile on your face – you want to celebrate it.

My colleagues also inspire me a lot. For instance, our faculty members, who are leading researchers in their respective fields in spite of their young age: Stanislav Glybovski with his expert microwave radiation knowledge; Maxim Gorlach – who knows all there is to know about theory. My research advisor always moves me with his unflinching optimism and grand goals and achievements. The success of my international mentors, such as Alexander Khanikaev, and the scale of their work also never fail to inspire me. The students also always encourage you to become better. Working in a team is generally beneficial for success, we move each other forward together.

How do you spend your free time?

The point is to use your time wisely. I have hobbies – I am a semi-pro footballer, I do armwrestling and play table tennis. I would do almost anything in this respect. I play the guitar, and recently I’ve started to read more.

What was the last book that impressed you?

John Grisham is most recent. I returned from the US not long ago. Well, actually, half a year ago. But anyway I decided to pick up The Firm by an American author, John Grisham. It’s about a guy who starts to work at a law firm after graduating from Harvard. It’s a light read, and there’s some life to it.

What do you remember most about the US?

I’ve been there several times. In 2018, I spent three weeks in Boston working with Alexander Khanikaev. After that, last year I won the scholarship to study abroad and went to the US to do a five-month internship with the Professor.

Everything in the US is more strict and regulated, you have to pay for a lot of things. Not every university has its own lab, so we had to rent equipment to create and study nanostructures. The competition there is more intense, everything is based on who would be the first to discover something new. It makes for great papers published in major journals, but it kind of kills your personal creativity. You are constantly racing and that’s stressful – but it was a useful experience that I would like to have once more.