Environmental-Monitoring Water Drones to Be Tested on St. Petersburg Rivers

In the future, the floating robots, which were developed by the staff of the company Airalab together with ITMO University engineers, might appear in the water bodies of Africa, Asia, and Latin America, as negotiations are already underway.

In September 2020, the rivers and canals of St. Petersburg might welcome small robots who will be tasked with analyzing the quality of water and searching for the sources of pollution. These works will be the next in a series of tests of the water drones created by Airalab, an ITMO Technopark resident.

“We expect that the epidemiological situation will be good enough, and we’ll be able to run a range of experiments to test our drones on the rivers and canals of St. Petersburg. We’ll attempt to draw up an environmental water map and look at the water’s state, perhaps, we’ll get to uncover some artifacts that’ll prove interesting in regard to the water quality,” explains Alexander Kapitonov, cofounder of Airalab, dean of ITMO’s Faculty of Infocommunication Technologies, and associate professor at the Faculty of Control Systems and Robotics.

The tests were to be conducted in the summer, but the COVID-19 pandemic changed the scientists’ plans. Nevertheless, the engineers envision that they’ll be able to properly test their system on St. Petersburg’s waters as soon as this September.

From Volga to Neva

The water drone project capable of conducting automatic monitoring of water quality has been going on for about two years. Built in Tolyatti, the first prototype’s goal was to prove the viability of the idea, identify various technical nuances during field experiments, and attract the attention of the public and the business community.

“Part of our team is based in Tolyatti, which is why the first experiments were conducted on the Volga river,” says Alexander Kapitonov. “There, the team members built the first prototype, equipping it with special sensors provided by our partners. With their help, the self-driving vessel could measure water pollution in the reservoirs where there is no rapid stream. After that, the prototype monitored the environmental situation in the Volga for some time.”

In 2019, it was decided that the project be moved to St. Petersburg, where, with the help of the staff of the Faculty of Control Systems and Robotics, the second prototype was developed, its lighter casing making the drone more maneuverable. What’s more, the developers also managed to cut the costs. Thanks to these improvements, the new version of the drone is better adjusted to working in narrow reservoirs, which will be useful when conducting measurements in small canals and watercourses of the Northern capital.

The project’s final task is to develop a small fleet of drones capable of conducting joint measurements on the water.

Specifics of working on the water

The development of floating drones is especially difficult because of waves and the water’s high resistance, these devices have to be capable of independent decision-making in terms of navigation and positioning. You can’t just blindly model them on the systems from self-driving vehicles, robotic loaders, quadcopters, and other similar systems operating on the ground or in the air. 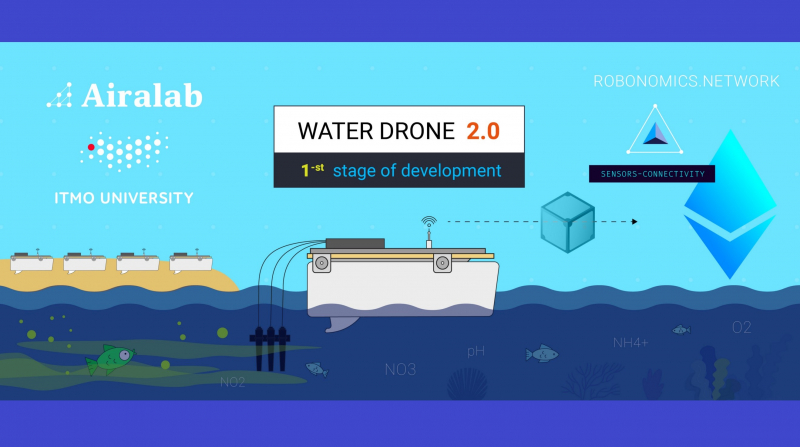 The drone had to be made compact, so that it could easily be transported by car and launched from unequipped shores. But such compactness shouldn’t be to the detriment of its autonomy and functionality – which is why light and durable fiberglass was chosen as the casing material, with solar panels being employed as one of the power sources. To protect the electronic components, three sealed cases with quick-release fasteners and a sealed hatch on the deck were added, which makes it easy to change and maintain the electronics.

To enable authorized access to the drone’s sensors, a protocol for their identification using a unique digital signature was developed. Other solutions include a sensors-connectivity software package, which makes it possible to aggregate the data from the sensors. The data can then be uploaded into a remote location on the web; for example, in one of the experiments, the information was sent onto the servers of the worldwide network Sensor.Community. What’s more, the published data is protected from counterfeiting using a combination of various tools based on blockchain technology.

The work has had both engineering and scientific impact. In the spring, the project’s team, together with their colleagues from Italy, published a paper in the journal Frontiers in Robotics and AI. Apart from the results of using the first prototype, the paper also presented the groundwork in planning a trajectory for the fleet of water drones as guided by the leader drone. 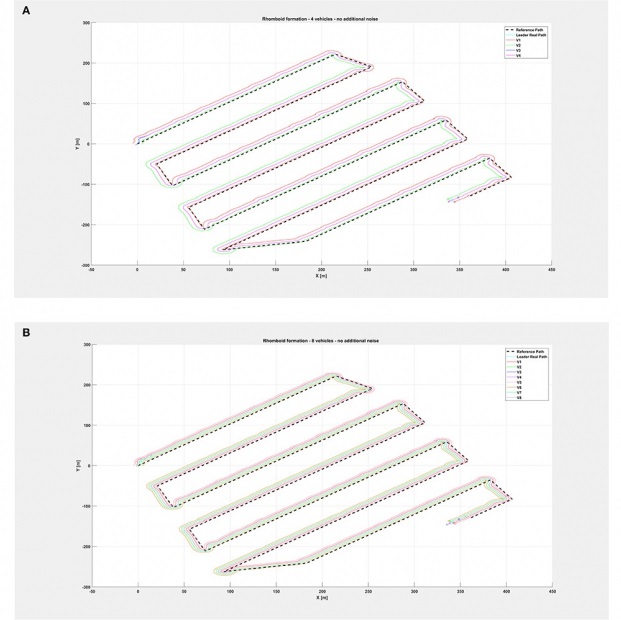 A study on the trajectory of the water drone fleet. Illustration from the paper. Credit: frontiersin.org

Interest from other continents

The drone’s developers expect their invention to be widely used. The engineers stress that according to expert estimates, in Russia about half of all groundwater and three-quarters of surface water have been subjected to some kind of pollution. In some countries, this figure is even higher. The technology for automatic collection and publication of data in open access can not only help cut the costs involved in environmental monitoring but also raise the public’s trust in the result of such research.

At the end of last October, Airalab presented their drone at one of the field’s largest exhibitions, IoT Solutions World Congress, in Barcelona. Guests from South America and South-East Asia expressed their interest in the drone. Because of the pandemic, the team’s joint plans with potential partners from Uruguay have so far been postponed. However, at the moment, representatives of the company and ITMO University have resumed their search for partners for the project.

“We have for some time now been cooperating with the Barcelona-based company Inea, they have many offices in Latin America,” says Aleksei Lizunov, advisor to ITMO University’s First Vice Rector. “This is a service for establishing business connections between companies and universities. In particular, they help Latin American universities find potential partners in Europe, and, having decided to enter the Russian market, they chose ITMO University as one of the entry points. They are also promoting various businesses and startups in South America, where environmental issues and water quality control are very important. For one, the company already launched a project of smart taps for hotel and government agencies there, which made it possible to monitor the state of tap water. Airalab’s water drone project clearly interested them, with three potential market entry points already discussed – government agencies such as ministries of ecology and water resources, research centers and universities, and international organizations. We are primarily interested in such markets as Argentina, Uruguay, Mexico, Chile, Brazil, Ecuador, and Colombia. We are currently working on a cooperation agreement in the hope that this will help promote the technology in Latin America.”

The project’s authors note that the invention also attracted the interest of African countries, namely Angola.