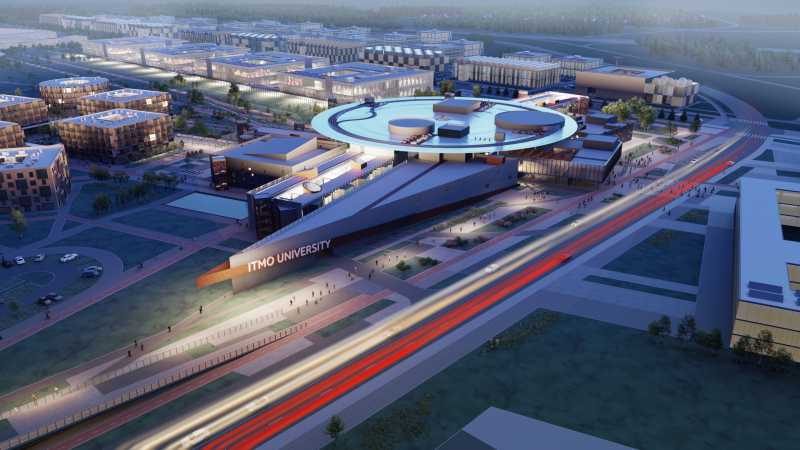 Overall, the area of approximately 90 ha along the southeastern side of the Kievskoe Highway between the turn to Kondakopshino and the border with the Leningrad Oblast is allocated for the campus. The satellite city Yuzhny is a new district of St. Petersburg, which is planned to feature a comfortable urban environment and new centers of attraction and development of the city and the region at large.

The design for ITMO University’s second campus was commissioned by the ITMO Highpark company. The project by Nikita Yavein’s architectural bureau Studio 44 was reviewed at the meeting of a council of the St. Petersburg Government.

The project includes five blocks divided by four streets. As Nikita Yavein explained during his presentation, a large academic building will be constructed during the first phase of construction. A multi-level conference hall will be located in the central roofed plaza. In addition, the academic building will include various zones, such as classrooms, a student club, a museum, a library, working spaces for administration, and a food court. According to the architects, this building will become the core of the campus and will connect other locations together. Apart from the academic building, a student club and two dormitories are to be erected during the first phase of construction.

“As we worked on this project, we immersed ourselves into the ideology of its potential users. We observed the educational process and spent time at ITMO in order to find out how the students study, communicate, and how the university operates. As a result, we’ve produced an extremely open design that encourages communication. All the campus spaces, from the smallest to the biggest, are all tied together,” says Anton Yar-Scriabin, the main architect of the campus and a junior partner at the architecture bureau Studio 44.

Four research centers, a sports facility, the National Center for Urban Studies, a business incubator, as well as other dormitories are to be constructed during the second phase of the project. The dormitories and the academic building will be connected by a roofed path. The research centers and the academic building are to be connected by a gallery.

“When we began working on a second campus, we decided straight away that it should be just for Master’s and PhD students, whereas Bachelor’s students would remain in the center of St. Petersburg. That’s why the project was supposed to suit certain stages of education,” comments Vladimir Vasilyev, ITMO University’s Rector.

He also highlights that higher education is undergoing significant changes and the familiar approaches are becoming less relevant today.

“We visited more than 20 of the top 50 universities in the world to find out how education and research are done there now. We noticed a fundamental difference: today, the leading universities are moving away from the approach when studies are based on strictly specialized disciplines. Today, interdisciplinary approaches that involve specialists from absolutely different fields to complete one task are relevant. In the future, even a transdisciplinary approach may appear – which means that non-academic partners are also to be involved. Our colleagues say that the infrastructure of old universities is not suitable for solving new problems. Therefore, the idea of “mixing” various specialists, creating opportunities for meetings, working together, is extremely important for the educational process. In our opinion, the ideas we had formed were fully implemented by Studio 44,” he says.

ITMO Highpark is an integrated science, education and innovations center under the aegis of ITMO University, located in St. Petersburg’s Pushkinsky District on a total area of 100 ha. The project includes an educational, scientific and innovative infrastructure with a sum area of approximately 260,000 m2.

The goal of the project is to unlock human potential and establish an ecosystem conducive to an increase in talent, quality of life, and capital.

ITMO University’s second campus is planned to be an environment for the personal, professional, and creative growth of students and employees. Its educational activities are based on Master’s and PhD programs with a focus on applied research and its subsequent commercialization. Scientific and technological areas of focus include intelligent technologies, cyber-physical systems, photonics, quantum technologies, and biochemical technologies.