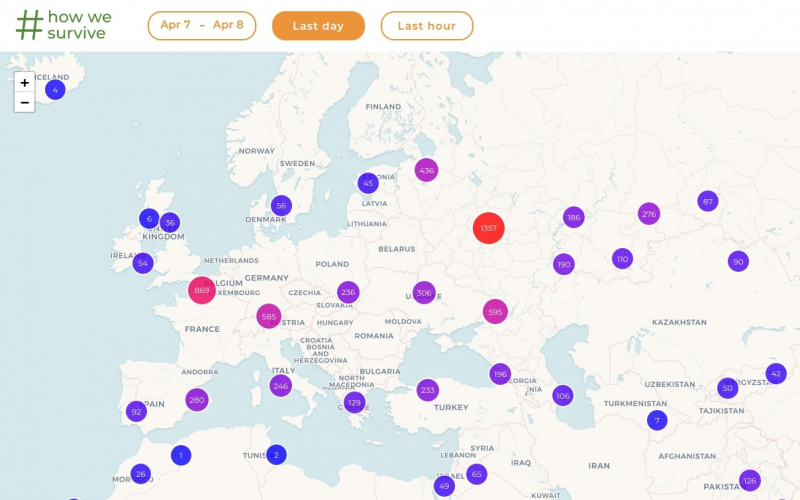 If you’ve already become familiar with every corner of your home, sorted all your books in alphabetical order, and learned to play the clarinet, but are still struggling with self-isolation-inflicted loneliness and anxiety, a new app by ITMO University researchers is just what you need. HowWeSurvive allows you to explore an interactive world map and learn how people are dealing with quarantine in other countries, in other cities, or on your block.

The coronavirus pandemic has completely changed the everyday lives of billions of people around the world. The social connections we’ve become accustomed to are falling apart as people spend days inside their homes avoiding most contact with the outside world. Even those who are still commuting to work must abstain from dropping into their favorite bar or meeting with friends at a cafe. Trying to make use of newfound free time, some have taken up programming, some binge on TV shows, and others learn to cross-stitch.

But for a majority, none of these things help to cope with a sense of isolation and a severe lack of human contact. Everybody wants to know they’re not alone and that someone out there feels the same. To help others find these kindred spirits, programmers from ITMO University have developed a new app called HowWeSurvive.

“I’ve noticed that users on social media have started to write more often about feeling alone, afraid, and anxious,” says Alexander Visheratin, one of the app’s developers and a senior researcher at ITMO University’s National Center for Cognitive Technologies. “Many aren’t used to being at home all the time, which causes discomfort. I wanted to help them out somehow during these trying times, so I started to come up with solutions. One night, I had this idea that a lot of people would probably want to find out how those in other cities or even countries spend their quarantine. That’s how the app began.”

The project’s team consists of two people: Alexander Visheratin and his colleague Iuliia Fedorova, a frontend developer at ITMO University. Development took them about a week: it was important to make sure that the app functions quickly and correctly despite the overall network overload during the pandemic.

“It’s important to realize who this or that visualization is for, who would use it and how,” says Iuliia. “We’ve made the design simple: the interface is clutter-free and minimalistic, and we’ve used as few development tools as possible to make the app function well even with a poor internet connection.”

The app itself is an interactive map of the world with pins depicting photo and video posts on Instagram. The map represents the project’s biggest difference from the features that already exist within the social network: posts are distributed not by topic or time, but their geography – provided that the users add a geotag and the hashtag #howwesurvive to the post.

“People can find out what sorts of posts people make on Instagram in a certain city, region, or country,” says Alexander. “Users can zoom in or out depending on how detailed they want the visualization to be. You could take a look at Russia in general, St. Petersburg in particular, or even a specific neighborhood in the city. You could even see what people are posting about down the street.”

The app’s algorithm indexes Instagram posts with the relevant hashtag on its own, but users can speed up the process by visiting the site and submitting a link to their post, which will put their post on the map nearly instantly. Even those without an Instagram account can explore the map.

“We’ve put an emphasis on bright markers on the map, which are colored differently based on the number of posts within a given area,” says Iuliia. “Click on one of the dots and you’ll see a modal window that’s similar to an Instagram feed in appearance; users will find it easy to navigate thanks to the familiarity. Overall, I’m happy that we’ve been able to create this app that reflects the idea of global solidarity. It’s astounding how alike our experiences of living through these events are: when you explore the map, you’ll see that people from all over the world are expressing amazingly similar concerns and feelings.”