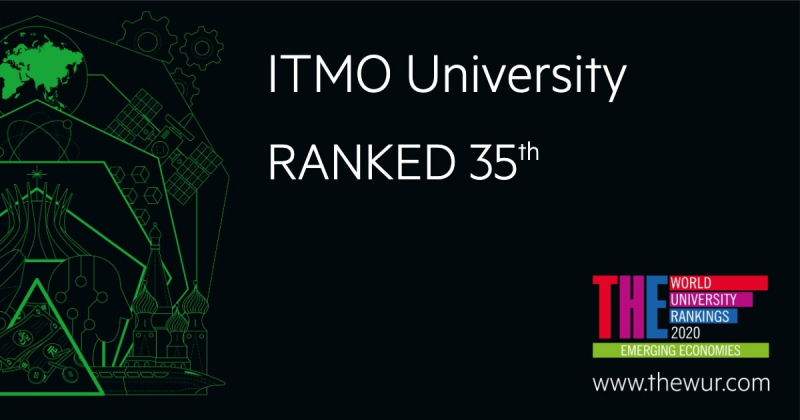 ITMO University has been ranked among the top 40 universities in countries with emerging economies as part of the Times Higher Education Emerging Economies University Rankings-2020. The full ranking was published on February 18, 2020. The St. Petersburg-based university has strengthened its position and rose up to the 35th spot after placing 53rd last year. All in all, the latest THE ranking includes more than 400 universities.

The expert teams of Times Higher Education (THE), one of the world’s most esteemed higher education press outlets, have published the seventh ranking of universities in countries with emerging economies. The ranking is based on THE’s World University Rankings, which is also published annually.

When compiling the ranking, the company takes into account the same criteria as the general ranking, namely the 13 performance indicators sorted into five general areas: Teaching, Research, Citations, International Outlook, and Industry Income. However, the individual weight of these indicators differs from that in the global ranking. Due to the specifics of national development in countries with a developing market economy, more importance is given to the International Outlook and Industry Income areas, while Citations are given a somewhat reduced role.

“Our two key competitive advantages served as the cause of this positive dynamic. The first is the growing level of international accessibility at ITMO: with each year, the number of international students at the University grows, and we are actively involving international researchers and academic staff in our work. This is important because these specialists not only share their knowledge and scientific perspectives with us, but they also integrate that into the learning process, making education truly research-based; this, in turn, means that the graduate and postgraduate students, as well as young scientists, are becoming familiarized with the latest practices. They have the opportunity to quite literally touch the forefront of science and help advance it forward. Our second advantage is the revenue from R&D projects and the amount of funding we raise from companies that are part of the real economy. This is evidence that the University does not exist in isolation and its work is in demand among businesses. ITMO University is truly presenting itself not only as a research university, but an entrepreneurial one, as well,” says Ilya Kuftiryov, the head of Rankings Research Center at ITMO University.

This year's ranking includes more than 500 universities from 47 countries, including 39 Russian universities (35 last year). ITMO University, which placed 35th on the global ranking, was ranked fifth among all Russian entrants on the list, thereby becoming the top-rated university outside of Moscow. The top performance shown by a Russian university was that of the Lomonosov Moscow State University, rated 5th in the world. The Moscow Institute of Physics and Technology (MIPT) placed 12th, and the Higher School of Economics placed 18th.

The Webometrics ranking has also been published recently. The Spanish research group Cybermetrics Lab, which publishes the ranking semi-annually, uses it to evaluate the degree to which universities are represented in the global online environment. The ranking includes 12,000 universities, including 353 institutions from Russia.

“This time around, ITMO is in its previous sixth place among Russian universities and in the 723rd place globally. A slight downshift has taken place in the general ranking, in which we were ranked 692nd last year. But considering the number of universities that are evaluated for the ranking (over 28,000), it is quite clear that a change of 20-30 places up or down has no significant effect on the overall result. Even the slightest change in any parameter could result in such a shift. Besides, we’re prone to consider this minor downshift with the “technical” aspect of ITMO University’s recent transfer to the itmo.ru domain. Webometrics is an internet-based ranking that focuses on a university’s online presence, which is why the change in our domain name could have had an effect on the results; nevertheless, the situation seems to be stable,” notes Ilya Kuftiryov.

He also adds that ITMO University has improved its performance in the Excellence criterion (which assesses the 10% of the top-cited articles in 26 scientific fields), indicating the relevance of publication efforts.