The second Russian-Spanish week: how to learn languages online 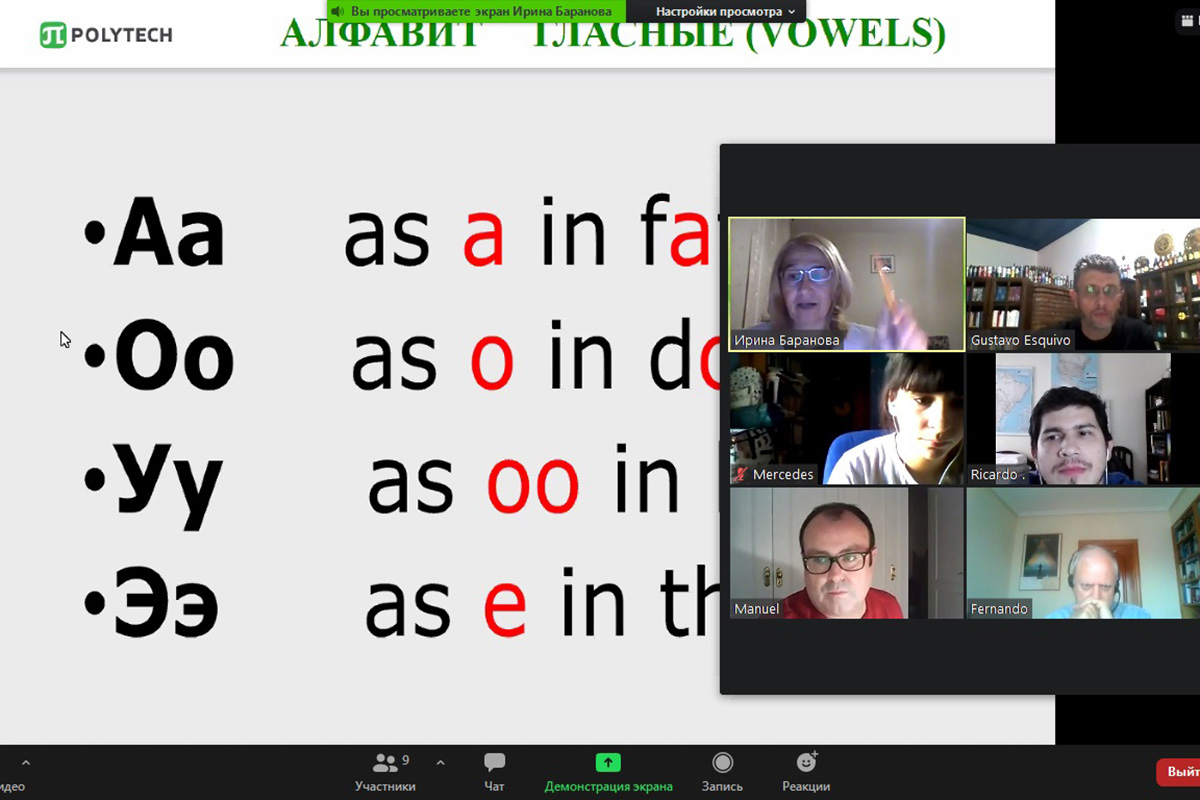 Each participant of the Second Russian-Spanish Week of Language and Culture, which SPbPU and the University of Cadiz (Spain) ran from November 16 to November 20, could find the event to their liking: students, teachers, employees of international offices and just fans of foreign languages listened to lectures, participated in round tables and master classes, enjoyed virtual tours and a flamenco concert, and competed in the “What? Where? When?” intellectual quiz, created by analogy with the popular Russian TV show.

As last year, the organizers paid considerable attention to Russian and Spanish language classes. Over 100 participants joined the lessons, which were held in mini-groups during the week on the Google Meet platform. “Of course, holding international events in an online format allows you to attract a wide range of listeners to the Russian language. At the same time, both teachers and students are fully dependent on technical means and lack visual communication. Nevertheless, all of us have taken these problems with understanding,” said Irina BARANOVA, Director of the SPbPU Center for Testing Foreign Citizens in Russian, who together with her colleagues from the SPbPU Higher School of International Educational Programs taught lessons for foreign students. According to Irina Baranova, it is much more difficult to organize and conduct an interactive lesson online than in the conditions of offline learning. As part of the Russian-Spanish Week of Language and Culture, Russian language classes were held for both non-Russian and Russian speakers on A1, A2, and B1 levels. Training sessions were also held to prepare students for testing at level B2. The classes were conducted in the format of express courses.

“It should be noted that among the listeners there are many participants who learn Russian to communicate with Russian friends, relatives and colleagues. These are people who are interested in the Russian language and Russian culture. That’s why we really want to keep our listeners motivated to continue learning Russian. We hope that we succeeded,” commented Irina BARANOVA.

The Russian and Spanish lessons were met with great warmth by Russian and foreign participants. “I learned about Russian and Spanish Language and Culture Week through Twitter at the Russian Embassy in Spain and decided to participate because I like Russian culture and was interested in the program. I had never studied Russian before. I really liked the classes and the materials that were sent to us additionally. I would like to continue learning Russian, and I am also considering future admission to a Russian university,” said David Riano MARTÍNES, a college student from Colombia.

Russian participants showed no less interest in Spanish lessons. “I have been studying Spanish for a long time – it is a hobby and something like psychotherapy. I know about Russian-Spanish week not by hearsay – I participated last year, and I was hoping for this format to become traditional. And, of course, I am glad that in 2020 even the pandemic did not become an obstacle to the Second Russian-Spanish Week. The teacher who taught our lessons was sensitive, positive, and gave excellent feedback. She explained everything that was incomprehensible. In general, the program of the Week impressed me very much – I am already looking forward to next year, hoping that it will be possible to travel and visit the University of Cadiz, which will host the Third Russian-Spanish Week of Language and Culture,” said Alexandra SUKHOTINA (St. Petersburg).

The next Russian-Spanish week of language and culture is indeed planned to be held at the site of the University of Cadiz. The online format of a number of events will also be preserved – the organizers noted their high demand among Russian and foreign participants. Broadcasts of other events of the Second Russian-Spanish Week, as well as current news, can be viewed in the official group of the event on Facebook.

The 2nd Russian-Spanish Language and Culture Week is held in cooperation with  National Research University “Higher School of Economics” (Russia) and  Madrid Polytechnic University (Spain). The event is held with institutional support of the RF Embassy in Spain, the Spanish Embassy in the RF,  the Russian Center for Culture and Science in Madrid and  the Cervantes Institute in Moscow, the International Association of Russian Language Teachers and Literature and the Russian Society of teacher of the Russian Language and Literature,  the Associations of Spaniards of Russia  and the Spanish Association of Russian Language and Culture Professionals, and th International Public Foundation for Culture and Education.

Scientists take a step towards expanding the use of magnetic fluids in medicine and technology
Magnetic fluids are used in many different areas, including medicine, electronics, mechanical engineering, ecology, etc.