Researchers from the Peter the Great St. Petersburg Polytechnic University (SPbPU) discovered and theoretically explained a new physical effect: amplitude of mechanical vibrations can grow without external influence. Besides, the scientific group offered their explanation on how to eliminate the Fermi-Pasta-Ulam-Tsingou paradox.

The scientists of SPbPU explained it using a simple example: to rock the swing, you have to keep pushing it. It is generally believed that it is impossible to achieve oscillatory resonance without constant external influence.

However, the scientific group of the Higher School of Theoretical Mechanics, Institute of Applied Mathematics and Mechanics SPbPU discovered a new physical phenomenon of “ballistic resonance”, where mechanical oscillations can be excited only due to internal thermal resources of the system.

The experimental work of researchers from all around the world demonstrated, that the heat spreads at abnormally high speeds at nano and micro levels in ultrapure crystalline materials. This phenomenon was called ballistic heat conductivity.

The scientific group supervised the corresponding member of Russian Academy of Sciences Anton Krivtsov, derived the equations describing this phenomenon and made significant progress in the overall understanding of thermal processes at the micro-level. In the study published in “Physical Review E”  researchers considered the system behavior at the initial periodic distribution of temperature in the crystal material.

The discovered phenomenon describes that the process of heat equilibration leads to mechanical vibrations with an amplitude that grows with time. The effect is called ballistic resonance.

“Over the past few years, our scientific group has been looking into the mechanisms of heat propagation at the micro and nano levels. We found out that at these levels, the heat doesn’t spread in the way we expected it to: for example, the heat can flow from cold to hot. This behavior of nanosystems leads to new physical effects, such as ballistic resonance”, said Associate Professor of the Higher School of Theoretical Mechanics SPbPU Vitaly Kuzkin.

According to him, in the future, the researhers plan to analyze how this can be used in such promising materials as, for example, graphene.

These discoveries also provide an opportunity to resolve the paradox of Fermi Pasta-Ulam-Tsingou. In 1953, a scientific group led by Enrico Fermi carried out a computer experiment that later became famous. Scientists considered the simplest model of oscillations of a chain of particles connected by springs. They assumed that the mechanical movement would gradually fade away, turning into chaotic thermal oscillations. Still, the result was unexpected: the oscillations in the chain first almost decayed, but then revived and reached nearly the initial level. The system came to its initial state, and the cycle repeated itself. The causes of mechanical oscillations from thermal vibrations in the considered system have been the subject of scientific research and disputes for decades.

The amplitude of mechanical vibrations caused by ballistic resonance doesn’t increase infinitely, but reaches its maximum, after that it starts gradually decreasing to zero. Eventually, the mechanical oscillations fade completely, and the temperature equilibrates in the whole crystal. This process is called thermalization. For mechanicians and physicists, this experiment is vital because a chain of particles connected by springs is a good model of crystal material.

Researchers of the Higher School of Theoretical Mechanics showed that the transition of mechanical energy into heat is irreversible if we consider the process at the finite temperature.

“Usually, it is not taken into account that in the real materials, there is a thermal motion, along with the mechanical one, and the energy of thermal motion is several orders of magnitude higher. We recreated these conditions in a computer experiment and showed that it is the thermal motion that damps the mechanical wave and prevents the revival of oscillations,” explained Anton Krivtsov, director of the Higher School of Theoretical Mechanics SPbPU, corresponding member of Russian Academy of Sciences.

According to experts, the theoretical approach proposed by scientists of SPbPU demonstrates a new approach to how we understand the heat and temperature. It may be fundamental in the development of nanoelectronic devices in the future. 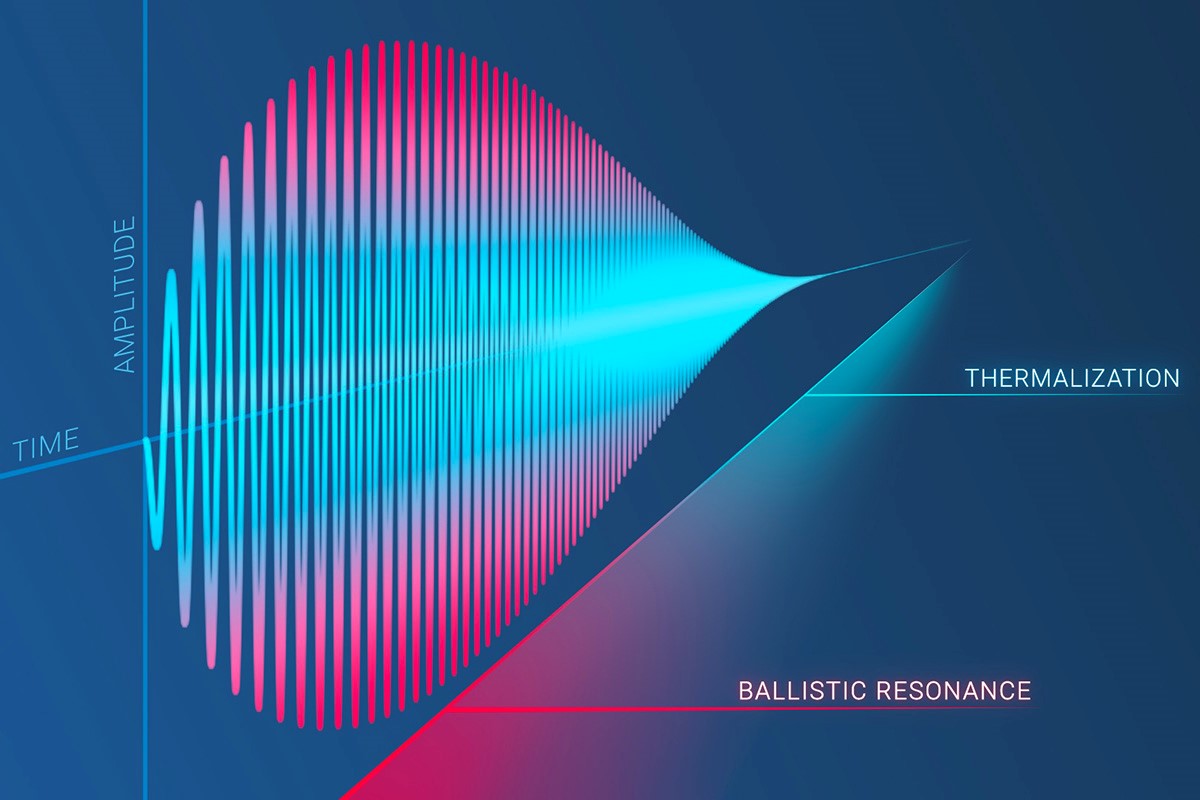