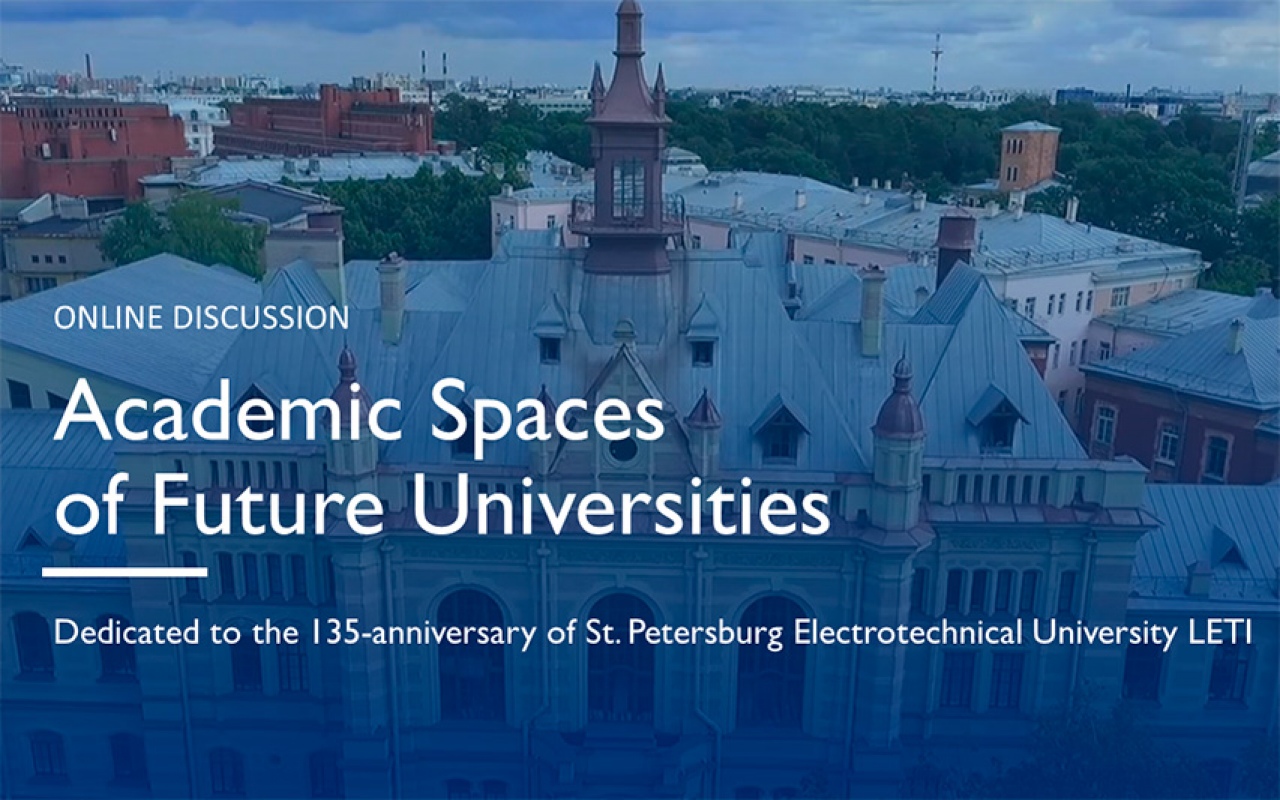 On March 18, ETU "LETI" hosted an online discussion "Academic Spaces of Future Universities," where experts from Russia, Netherlands, Italy, and Finland presented principles and best practices for transforming public and educational spaces of long-biography universities. The event, supported by Nuffic Neso, the Netherlands Education Support Office, and the Consulate General of the Kingdom of the Netherlands in St. Petersburg, was held within the program of the LETI's 135th anniversary.

In his welcoming speech, Ivar Scheers, Deputy Consul General of the Netherlands in St. Petersburg, emphasized that education is a key factor for the sustainable development of societies, and the ongoing transformation in this sphere makes quality learning spaces even more crucial.

Anastasia Minina, Vice-Rector for International Affairs of ETU "LETI," opened the discussion by introducing the international audience to the university's architectural history from its Building 1 of the early 20th century to Building 5, in use since 1970s. Speaking about the university perspectives, she emphasized the importance of digital solutions and virtual formats added to physical spaces.

Since 2013, the number of students at our university has doubled. It has become a new challenge for us to create a comfortable, inclusive, and motivating environment for all students. The university's anniversary is a great opportunity to plan the future that LETI can build on this historical foundation." - Anastasia Minina, Vice-Rector for International Affairs of ETU "LETI".

The pandemic has exposed universities' shortcomings and prompted them to make substantial changes, but their fundamental functions have not changed. Dara Melnik, Head of the Research Group at the SKOLKOVO Education Development Centre (SEDeC), proposed a strategy for universities emerging from the lockdown environment. To unlock intellectual and social potential after distance learning, students should get more opportunities for additional classes and research on topics of interest, and campuses should provide more opportunities for multi-format activities.

Pascale Leistra, a senior architect at Atelier PRO (Netherlands), explained the benefits of preserving historical heritage in universities. According to the speaker, the integration of new and old buildings into a unified multifunctional environment creates a unique creative atmosphere for studies and research. People do not doubt the value of the most attractive buildings, but buildings without the unconditional love of the public should receive new functions and turn into modern dynamic spaces. It is also essential to consider not only individual buildings but a campus as a whole.

"I think the LETI campus is a real treasure, and it's well preserved. I have some advice. Preserve your treasures well. Assess the value of your historic buildings. Make a master plan so you always can check whether you're on the right track. Find new partners and co-create. Make dynamic planning and start the contest!" - Pascale Leistra, a senior architect at Atelier PRO (Netherlands).

Universities can transform to get ready for the future not only through architecture but also through technology. Antonella Longo, Assistant Professor at the Department of Engineering for Innovation of the University of Salento (Italy), told how students at the university work in labs using virtual and augmented reality. In such an environment, they can "touch" the molecules of substances and study their reactions or work with the equipment of a company located in another country. It expands international research opportunities and promotes inclusiveness in engineering education.

Jasper van Winden, Project Manager for Educational Innovations at Utrecht University, believes that traditional classrooms hinder teacher-student interaction, and wires stretching to the fixed computers restrict free exchanges. The productivity in the new interactive classrooms, discussed and designed together with students, faculty, and experts, has improved dramatically. In transforming learning spaces, the University of Utrecht prioritizes student interaction with professors and classmates, diversifies learning activities, and focuses on students rather than teachers.

Like LETI campus, which has buildings dating back to imperial times, the South-Eastern Finland University of Applied Sciences (XAMK) creates new learning spaces in early-twentieth-century Russian army barracks. Ari Lindeman, Research Manager at XAMK, shared the values that guided the university's renovation: historicity, a mixture of old, new, and future layers of buildings, continuity, variability, complementarity, and a combination of theory and practice.

Andrey Surovenkov, Head of Architectural Environment Design Department in Saint Petersburg State University of Architecture and Civil Engineering, told about the project of a new type of urban campus. Masters of his university have proposed a concept, which matches learning and research spaces with business facilities and cultural infrastructure, including museums and libraries.

In conclusion, Anastasia Minina, Vice-Rector for International Affairs of ETU "LETI," summed up the discussion and announced the International Contest of Young Architects "LETI: Future Academic Spaces." Its participants will design projects aimed at transforming the four signature locations of its campus for study, work, communication, and recreation.